The city is taking advantage of the pandemic keeping people mostly at home by doing a TON of roadwork this summer. Lancelot was joking the other day that we’re pretty well surrounded by it, and he’s exactly right. They’ve reached the point where they’re working on something directly behind our house (we back up to a major street).

I’m not entirely sure what’s going on today other than it involves concrete, I saw the trucks, and it’s noisy as fuck. It quite honestly sounds and feels, simultaneously, like a giant is walking around outside our house. The floor is shaking. Not even exaggerating here. I’m waiting to hear someone’s car alarm go off.

Meanwhile, Pippy the Wonder Pup is entertaining herself by chewing on a little blue rug I put in my office for her to lay on. I’m not sure what the deal is but she likes to chew on things. 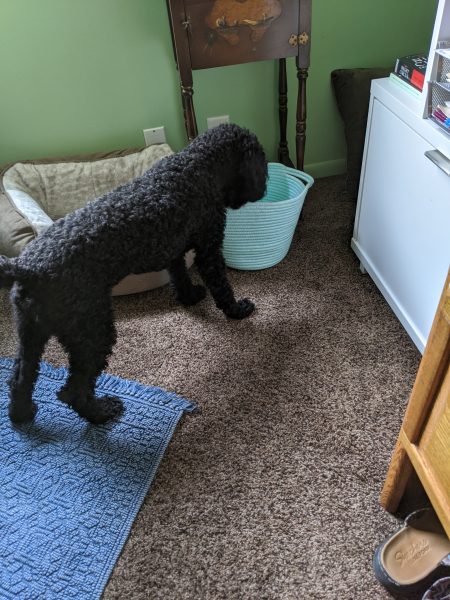 That’s the rug under her, at that point she was chewing on the fabric basket I keep in here for a few toys. She gets bored during my Zoom meetings sometimes, can’t blame her, so I try to entertain her. Anyway, she was grabbing her basket in her mouth and tossing it up and then smacking it around with her nose. Good times.

In an effort to keep her from chewing the edge off the rug I gave her a washcloth I had knit, one of the more unusual things that she’s long been fascinated with. That was great fun.

But still, the giants are out walking around and now I’m getting a headache. One last cute dog pic. At night when I go downstairs and relax she has to be right next to me. (there goes the car alarm!) If I sit out in the sunroom I have to sit in the big chair because it’s got a reasonably sized foot stool. 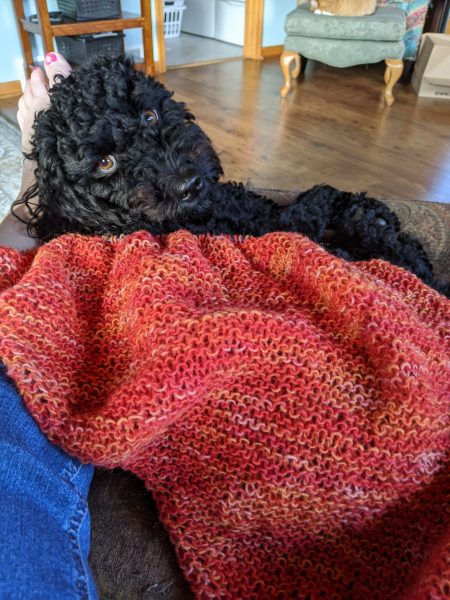 And hey, that’s a much more accurate picture of the color of the new shawl.

One thought on “of invisible giants and small black dogs”