Let’s see, where to begin…

I’m quite excited about how things are going with the weight loss. I have been trying to make sure that I not only get my steps in but I also pay attention to my calories and eat a good variety of food, including healthy fats, and that I’m getting plenty of water. It’s a process, to be sure, but there are definitely pieces of this that are just second nature now. And that, probably more than anything else, makes me ridiculously happy.

Well, also, my pants are starting to be way too baggy. That makes me pretty fucking happy too.

Tomorrow morning I’m going with Mom to get a manicure, something I haven’t done since right before Lancelot and I got married last August. I certainly don’t feel like having the one shot is going to magically make me bullet-proof, but it gives me hope. I do feel like there are a few more things I can do, still carefully, and that I don’t need to worry quite constantly or quite as much. It will still be many months, if not until next year, before I feel safe to travel anywhere other than by driving our car. I’m just not ready for planes yet.

I am ready for restaurants, and that’s pretty exciting. We’ve done a lot of take out in the last year, generally just once a week but still. There’s just something about actually going in somewhere and enjoying a good meal. I’m even going to get spiffed up. For my outing on Sunday with my folks I have a black dress that I’ve never worn that actually fits very nicely now.

I’m not a fan of this plague bullshit, not at all. We’ve now reached the point where Lancelot and I agree that the less interaction I have with humans who are not him, the better. The community isn’t getting any safer here and our governor isn’t doing fuck-all about it. So it’s time to step up my own personal vigilance even further.

So I guess that’s a big part of what brings me to today’s post. Interestingly enough, there’s a tie within a tie here. I’ll get to that. I want to start with a list of things I’ve learned as a result of living through the COVID-19 pandemic in 2020.

***Disclaimer: I am not a licensed mental health practitioner, though I play one in my imaginary world. Like everything on this blog these are just my observations. Your mileage may vary.

So far I’ve finished three gifts. I still have two left to make; hopefully I’ll start another one tonight. Today has been super rough so I might just go pass out somewhere. It has snowed off and on all day and it’s just cold. Of course Garth has been sleeping right next to the heat vent in my office all day so that doesn’t really help.

First things first – this shit is HARD. And by “this shit” I mean “life” right now. I won’t pretend that I had any idea what this whole Rona Plague business was going to be when it all started, but I certainly didn’t figure it would be like this. And I had NO FUCKING CLUE that my fellow humans had the potential to be so ridiculously stupid about all of it.

I think it’s probably safe to assume that we’re all struggling, at least a little. It’s still difficult to get certain supplies, like toilet paper and seriously what the ever loving fuck is up with that? We’re still not supposed to gather unless it’s outside or with people that already live in our homes, and in many places there are still mandates to wear face masks (which I FULLY support). I haven’t seen a movie in a theater in so long that I can’t tell you what the last movie I saw was, we haven’t been to any live concerts or theatrical shows, and I still don’t get the deal with the TP shortage.

And we’re scared. There’s proof now that someone who had the virus and recovered has been re-infected by another genetically different strain. So yeah, WTF?

We need some social interaction that doesn’t happen through a screen, but how do we get it safely? That is a fabulous question. According to my psych doc the time has come to get a fire pit or space heater and a warmer coat, you know, so we can have some friends over but stay outside so that we stay safe. Maybe we’ll build a snowman, who’s in? (no snow yet but it’s coming, oh yes, winter is coming…)

At any rate, we’re a “red” state again (still?) so I’ve decided we aren’t going out this weekend. I’d rather stay home and play it safe than go out anywhere unnecessary. Besides, there’s plenty of stuff to do around the house. We are actually going to have a very small Halloween party in the garage. I purchased an electric space heater and I found an idea for using Sterno cans to make little fire pit things for roasting hot dogs and marshmallows. I am very much looking forward to it, and yes, we’ll be keeping it safe.

So there are a few things to do to get ready, and there’s always knitting to do. I’m still working on the shrug I started but it’s just boring right now. I like boring sometimes, but I also like something that requires a little more concentration. With that in mind, and as always trying to find something that was already wound up and would work, I started Off Kilter last night. I’m using a solid fuchsia pink (again, it’s what was ready to go) that I think is going to be amazing.

I’m not typically one to spend money on apps for my phone but I decided to break down and get the Row Counter app (links to Google Play store), in part because I can download patterns I have saved in my Ravelry library right into it. I had been using the free version but the upgrade lets me put in more details, photos, and track not only my row but the repeats as well. So far I really like it and find it to be worth the $9.99/year price. 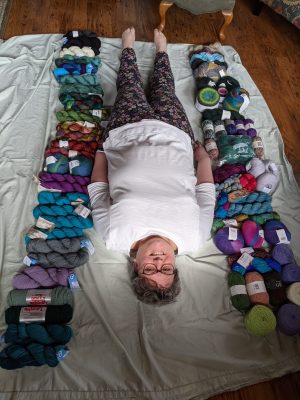